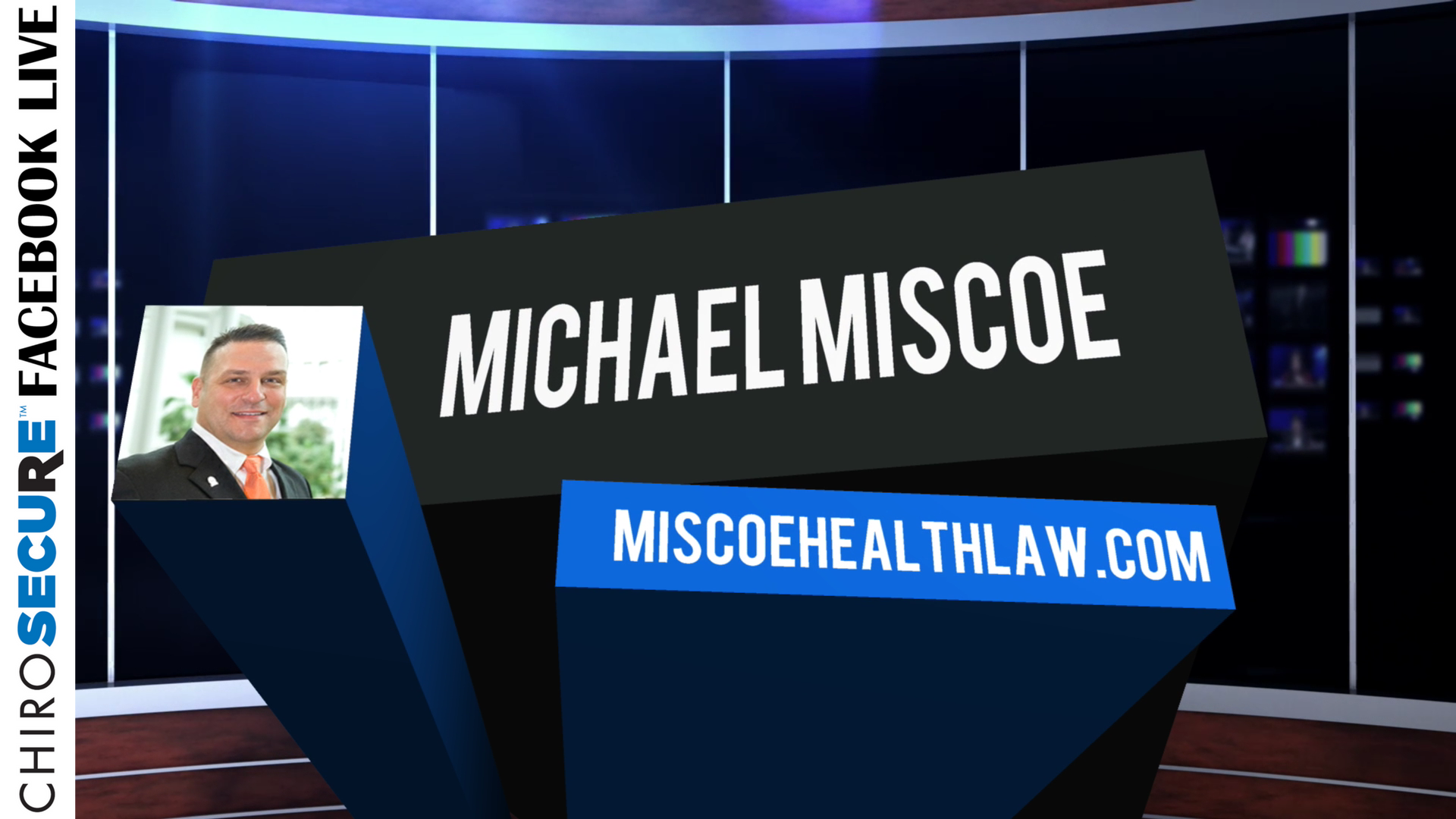 Disclaimer: The following is an actual transcript. We do our best to make sure the transcript is as accurate as possible, however, it may contain spelling or grammatical errors.

Hello everyone. This is Michael Miscoe with Miscoe Health Law, uh, for another Facebook live presentation, uh, on behalf of ChiroSecure. And this week’s topic is, uh, risk areas associated with implementation of regenerative medicine. Um, now this is a multi-disciplinary practice issue, uh, because a, uh, straight up chiropractic practice, uh, could not likely do these procedures, um, because they involve injections and the substance HTTPS. Um, and let me see human cell tissue products, uh, is what HCT HCT P stands for. Uh, and these are getting a lot of, uh, attention both for on the positive and the negative side, um, being the business that I’m in, I’m going to focus on the negative. There’s a, if you want to look at the, uh, uh, health benefits or, uh, that are promoted relative to the use of these for degenerative conditions and whatnot, um, you can, uh, do that on your own.

My concern, uh, is the risk areas associated with practices who have gone into this model of treatment and, uh, some of the, uh, adverse things that have occurred. And there’s three areas of potential liability. Um, first, uh, having nothing to do with whether you attempt to build these services or not our consumer protection issues. Um, most States have consumer protection laws, uh, consumer fraud laws, uh, and there have been a number of practices that have been, uh, challenged and prosecuted, uh, for violations of these laws, uh, based upon, uh, how they market, um, these, these particular products, uh, the likely effects, um, and, and obviously, uh, charging for those services. Um, the second risk areas, licensure board issues. Um, and, and they’re a by-product of some of the consumer protection issues, but, uh, the board statutes in almost every state, if not every state, um, considers uh, misleading advertising, uh, as a, uh, uh, an area of concern and where providers can be sanctioned for issues, um, related to, uh, deceptive marketing practices, the final area, you know, focuses on those that advocate, uh, billing and reimbursement, uh, of the, uh, evaluations, the actual injections and the HTTP product itself.

Um, some, uh, product manufacturers have been successful in getting, uh, Q codes, which are, um, drug biologic codes, uh, in hick picks level two. Uh, those codes are procured from CMS and they misconstrue the fact that they got a code with meaning that Medicare has an obligation to reimburse. And if we had more time in this segment, I could go through the statutory rules as to why, um, these types of products, uh, along with homeopathic products are not compensable drugs or biologics. Uh, there have been some theories foisted that, um, they’re covered is incident to a physician services and supplies. And, um, I reject that theory only on the basis that where there is, um, quote unquote coverage for things that are provided incident to think about a, you go to your family practice, doctor, you get a blood draw, they bill for a vena puncture.

They don’t charge separately for the little cotton ball and a piece of tape that they put on your arm. Um, after they draw the blood, that is a service, uh, supply that’s incident to the vena puncture procedure, um, with HTTPS they’re billing for separately, for, uh, this actual, uh, substance, the HTTP product, uh, and, and billing a lot. And, um, uh, as a result that makes it not incident to some other services apply it’s separate to separate from, and in your receiving separate reimbursement, the other problem with it in the statutory definition of drugs and biologics, um, they’re not listed in any of the listed formularies, the us Pharmacopia homeopathic Pharmacopia national drug formulary, um, and they wouldn’t be because none of these products have been evaluated or approved by the FDA. Um, these are three 61 registration products under the consumer protection act, and essentially what that is, is a registry for tracking, uh, or assisting with the tracking of communicable disease spread.

Um, and it has nothing to do with FDA analysis or approval, uh, for marketing or use for any particular condition. And, and that’s, that’s what makes it problematic in Medicare. Similarly in the commercial payer market, given the almost unfettered authority for commercial payers to have after the fact, um, uh, determinations that, that something is not, uh, is experimental investigational and therefore not medically necessary, um, significant recoupment liability exists. And I do post-payment cases every day, and there’s really not much that I, or anyone could do in the face of that determination without, you know, extensive amounts of litigation and expense. Um, but you know, you’re challenging, uh, the payer’s ability to determine what is, or isn’t experimental investigation. Let’s face it. These things are new on the market. There’s not a lot of, uh, um, you know, a good research trial, a lot of anecdotal evidence that, that these were effective.

Um, but they haven’t achieved, uh, widespread, uh, use in the, uh, in the medical market. Having said that you need to be concerned if you’re going to get into this, um, that you evaluate, who’s helping you very, very carefully. I’m not going to get into the, uh, the various consulting groups that, that advocate, um, these products and the methods by which they do it, but you want to look at first, are they at, are they suggesting that you build this? And if they are, uh, you’re probably talking to the wrong folks, um, uh, worked with a colleague recently in, in working through a disclosure and refund associated with these, uh, to Medicare. Uh, and here’s the thing, you know, with these Q codes. I mean, they, they make for a very big target area because Medicare and the Medicare integrity contractors are going to see a rising exposure under these clouds codes.

And what I mean by that is the amount of payments, the more people that get into this and go Medicare, um, they’re going to see increased amount of payments under these codes. Some of these are going to start looking into what is this, uh, they’re going to realize that these are non-covered products. Um, there have been a number of challenges on medical necessity, uh, where, um, the provider actually won the medical necessity issue, but no one ever addressed the statutory coverage issue. Was it a covered drug or biological? And if they had raised that issue, then I think those decisions would have gone the other way, those decisions aren’t precedential. Anyway, they carry no way. You can’t throw one in front of another ALJ and say, Hey, you need to do what this ALJ did. Um, and especially if the issues are different. So I see, you know, significant liability for those practices that are getting, that are billing and getting reimbursed.

I will recommend disclosures and refunds. If that is you, um, to avoid any potential false claims, accuracy risk down the road. Uh, if you’re looking at getting, offering regenerative medicine to your patients, you know, you need to be very careful about how you market it in an extreme sense. Um, I would say acceptable marketing is you’ve tried everything else. Uh, drugs, medicine, considered surgery, nothing has helped you. Um, this costs a lot of money and it probably won’t work, but if you want to try it, sign here. Um, and that’s the kind of marketing you need to make sure that your patients understand that, that you cannot make any claims about the effectiveness of this therapy. You need to be very cautious about testimonials as creating or intimating that these therapies are effective, because even if you’re all cash, you still have liability. As I mentioned, under the consumer protection consumer fraud laws, uh, as well as your licensure board and it’s not yours, um, it, it would be the medical providers, licensure statutes for deceptive marketing.

And it was an ankle condition if I remember, um, and then the patient, um, filed a complaint with the chiropractic board and we got that put to bed, but it just shows you how sensitive people are to this regenerative medicine issue. A number of practices have, have gone down in very spectacular fashion, uh, across the country. Um, I’ve counted three or four, uh, practices that have been, um, uh, where allegations of, uh, consumer fraud and licensure issues have been levied against practices involved in regenerative medicine assessed huge civil penalties. So you need to be very, very cautious if you’re going to get into this area, uh, to make sure that your marketing is tight, forget about billing. I mean, just take that completely out of your way mind, uh, because, uh, from my perspective, that would be an, an unacceptable risk because there’d be literally no defense. Um, so, uh, hopefully that gives you a little bit of insight. If you’re interested in implementing that, reach out to somebody that’s knowledgeable about these issues and, and, and get into this very carefully, don’t drink the Kool-Aid on the marketing pitch, um, that, you know, this is your salvation, uh, going forward next week. Um, we’ll have, uh, Janice Hughes, uh, doing, uh, uh, an awesome presentation, uh, in the ongoing growth without risk, uh, seminar series. That’s all we have time for today. Thank you very much. And we’ll see you next time.